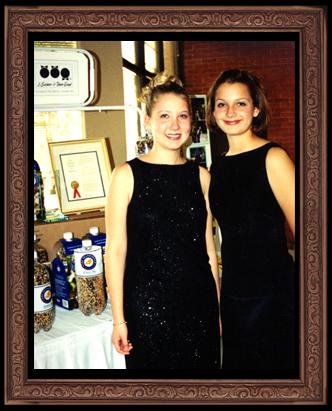 We are privileged to honor Annemarie and Esther Hoffman! Thes two young ladies began their business in 1994 when they decided it was time to design a squirrel-proof bird feeder. Annemarie and Esther enjoy bird watching, however, they were often frustrated by troublesome squirrels. Their first designs incorporated milk cartons, but they eventually opted for empty two-liter bottles. The result was a hanging bird feeder filled with seed at three levels that squirrels can't grab onto.

After putting the bird feeder in their yard, neighbors began to get curious. They, too, wanted bird feeders that were squirrel-proof. Within a few months, their basement had turned into a factory, and their father, Dennis Hoffman, had left his job as a hospital administrator to manage the family business. They obtained a trademark and trade name - Recyc-a-Feeder - and began a mail-order business.

The Hoffmans now have a patent on their bird feeder, called "The Transformer™", and have named their company Two Sisters and Their Dad.

This weekend, the Hoffmans hope to enter the pages of the Guinness Book of World Records by building the world's largest birdfeeder in the courtyard of Inventure Place.

It is our pleasure to welcome Annemarie and Esther Hoffman to Akron to receive the National Gallery Young Entrepreneur Award, sponsored by The Winners' League Foundation.