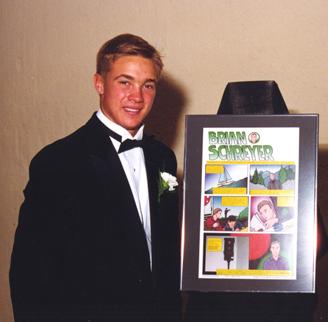 Aside from being an inventor, Brian is an accomplished sailor, an above-average musician, and a part time emergency medical worker who has used CPR to save lives. Once, while assisting a victim of an auto accident, Brian noticed that the policeman on the scene had to spend his time directing traffic rather than assisting with more urgent matters. This gave Brian the idea for a portable traffic signal that law officers could use under emergency conditions.

His invention, the Emergency Traffic Signal, was awarded 3rd place in the 1995 Duracell/NSTA Scholarship Award program. Due to the influence of his emergency medical work, Brian has created a second potentially life-saving invention -- the H.E.L.P. (Handheld Emergency Link to the Police -- which won the 1995 Intel Science Talent Search. Brian plans to pursue a career in either medical science or law.