The 2001 winner of the Young Entrepreneur Award is unusual. For the first time it was awarded to an entire class instead of an individual. For four years, the Tech. Prep. Engineering students at East High School, in Akron, Ohio, operated a business producing the Quizmaster, a device that helps wake up sleepy learners during review sessions and game-show-style quizzes. 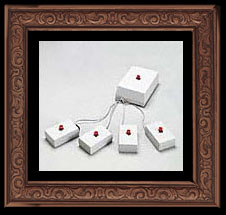 The Quizmaster consists of one master control and four individual team units. Each team unit has a recognition push button, light and buzzer. When students have an answer, they just push a button to be recognized. The first team to push their button locks out all other teams, turning on that team's indicator light and sounding their buzzer.

The teacher's master control unit is equipped with a button that will reset the system, disabling the light and buzzer when the teacher wishes to recognize the first team to ring in.

Fred B. Weiss, the electronics teacher at East High School, has overseen the project from its inception. Over the last four years, the Tech. Prep. Engineering class at East High School has sold more than 700 units, and done over $100,000 worth of business selling The Quizmaster, through Frey Scientific Co.

At the present time, three Akron area high schools are involved in the manufacture of this product, and two Cleveland area schools will join the production team.

These schools use profits from their sales to purchase equipment for classroom use.

The Young Entrepreneur Award was awarded at the National Gallery for America's Young Inventors Induction Banquet and Ceremony at the the Quaker Crowne Plaza in Akron, Ohio.