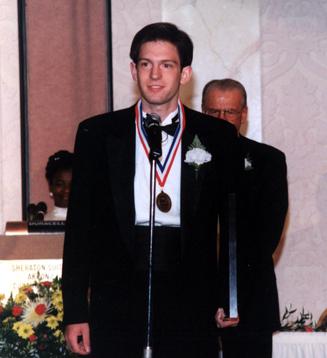 Ian Hagemann began his career as an inventor at a very young age. Before he was two-years-old, Ian made himself a new pair of shoes out of plastic tubes. At an early age he began to read everything he could get his hands on. He also loved rocks and model rocketry. Ian’s family lived in Paris for several years where he learned to speak French fluently.

During his senior year at Thomas Jefferson High School, Ian invented the Portable Vision Field Analyzer (or PVFA) as a science project. The PVFA analyzes the eye to detect glaucoma, strokes, tumors of the brain, and other neurological disorders accurately and quickly. Other machines doing the same job are the size of refrigerators and cost nearly $20,000.

In 1996, Ian won first place in the Duracell/NSTA Scholarship Competition. Ian has finished his first year at Princeton.