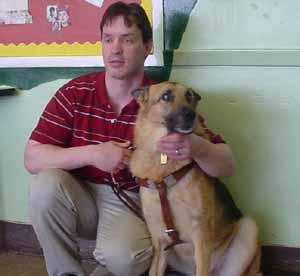 The 2006 recipient is James C. Hughes, a teacher of 11th grade United States History, Humanities 11 and Advanced Placement U.S. History at Farmingdale High School, Farmingdale, NY.  The award honors an American teacher who works with a physical disability, teaches in an especially challenging educational environment or has performed a heroic act by making an exceptional, personal or physical sacrifice on behalf of students.  The $10,000 prize is sponsored by the Christopher Columbus Foundation.

Blind since the age of three from a hereditary form of glaucoma, Jim was fortunate to have a mentor during his formative years, his older brother Joey, who also had the disease.  Joey’s untimely death at the age of 23--when Jim was just 16--spurred a determination and drive in Jim to use the lessons Joey had taught him--accept the challenges, keep fighting and never use his disability as an excuse.

Originally, Jim was discouraged by his college student-teacher placement coordinator from pursuing a teaching career in a regular school setting.  He was encouraged to only consider working with blind children.  However, Jim proved he lived beyond his disability.  Eventually winning the approval of his coordinator, Jim completed his student teaching in a “regular” school environment, and subsequently was hired as a teacher in a public school.

His love of history led to his choice of discipline; and his commitment to his students has broadened his impact on his school and community.  Regardless of whether his students are ‘at risk’ or advanced placement, his goal is to have an impact on their lives.  He gives his students hope for their future despite whatever challenges they might face, teaching that obstacles create opportunities for growth, perseverance and success.

“It is my privilege to honor James Hughes, this year’s Freida J. Riley Teacher Award recipient,” said Robert J. Glovitz, Chairman of the Christopher Columbus Fellowship Foundation.  “Jim is truly an outstanding educator.  His commitment to becoming a teacher in a public school, despite the myriad of obstacles and challenges of his blindness, is a testimony to his character.  Jim is a model of unparalleled determination and a true American hero much like Freida J. Riley.  Mr. Hughes shows his students firsthand that they can overcome any obstacles  in their lives, and ‘if they believe they can achieve’ anything,” said Glovitz.

Jim has a special rapport with his students.  Being blind enables him to treat all students equally, he cannot judge them based on appearances.  He makes his students so comfortable with his disability, that they sometimes forget that he is blind.  They don’t see or treat Mr.  Hughes  differently because he is blind; they accept him for who he is.

Jim stated, “I absolutely love teaching young people; I am at home in the classroom.  Blindness helps me to connect to students on a different level.  If my ability to overcome challenges has given at least one of my students the courage to overcome his/her own obstacles, then I am grateful for being blind.  My disability has been an asset in teaching and since that is my niche, I wouldn’t have it any other way.”

“Jim Hughes’ autobiography states that during his 14-year teaching career his greatest satisfaction is the rapport that he has with his students,” said Gay Evans, Assistant Executive Director of the National Museum of Education.  “He says that ‘being blind enables him to treat all students equally.’  His students share their life stories and are less guarded because he ‘sees’ the possibilities in all of them.  The Democracy that he is teaching in his Government and American History classes comes from his spirit of equal acceptance.  Like the wise fox from St. Exupery’s Little Prince, it can be said of Jim Hughes that, ‘it is only with the heart that one can see clearly.  What is essential is invisible to the eye.’  Jim’s wisdom far exceeds the limits of the horizon,” concluded Evans.

Jim is married to Diana, and has a daughter, Sara, who has also been diagnosed with glaucoma.  The Hughes are expecting the birth of a son later this month.

The award is named for Freida J. Riley, a math, chemistry and physics teacher at Big Creek High School in Coalwood, WV, during the early space race era of the 1950s and early 60s.  During most of her career, Miss Riley taught while suffering from Hodgkin’s disease, until succumbing to the disease at the age of 31.  The impact she had on her students is captured in the film October Sky, based on the novel, The Rocket Boys, written by her former student, novelist Homer Hickam.  Miss Riley inspired her students to dream beyond and overcome the limited opportunities of their era and environment.