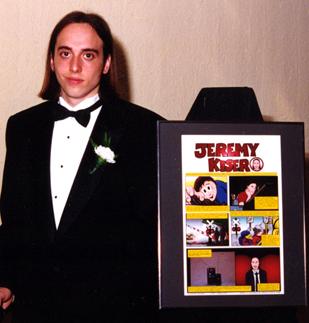 Jeremy Kiser is a gifted artist, writer, and inventor. When he was seventeen, his uncle suggested the need for more effective safety devices at train intersections to prevent collisions with cars and buses. This gave Jeremy the idea for the Guardian Angel -- an invention comprised of two simple parts: an inexpensive radio transmitter installed in trains, and a receiver installed in buses and cars. When a vehicale approaches a train track, the transmitter signals the bus or car if a moving train is within a distance of one-fourth mile.

The Guardian Angel received 2nd place honors in the 1997 NSTA/Duracell Scholarship Award program. Several individuals in state government have expressed interest in installing these devices in all Ohio trains and buses. Jeremy is presently developing his invention to include both a strobe and voice warning system.