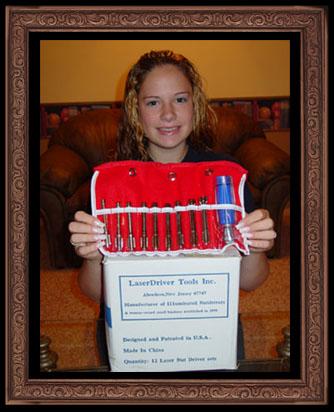 Good ideas often require unconventional thinking. It was Kristin Hrabar’s ability to see beyond the norm that led her to invent the Illuminated Nut Driver, an idea that has brought her high acclaim from invention competitions, the U.S. Patent and Trademark Office, and even the White House.

Kristin came up with the idea when she was only eleven. She was helping her father work on a home project. “He was working on the bottom of the clothes dryer and he couldn’t see the bolts. I had to hold the flashlight so he could see under the dryer.”

This is where her idea was born. She wondered why they don’t just put a light on the nut driver! So she designed a nut driver with a clear shaft and a light to make tightening nuts in dark places an easier task.

Because of the endless applications for such a tool, her invention is extremely marketable. Kristin was awarded a patent for her invention on her 12th birthday, and was one of the few inventors selected for a booth at the 25th Annual U.S. Patent and Trademark Office National Inventors Expo at the Epcot Walt Disney World Resort in Florida. She was later invited to attend the Millennium White House Tour in Washington, DC, where she met First Lady Hillary Rodham Clinton to talk about her invention.

Kristin’s Illuminated Nut Driver was picked up by a Chinese manufacturer and is currently being sold here: www.LightSaberTools.com