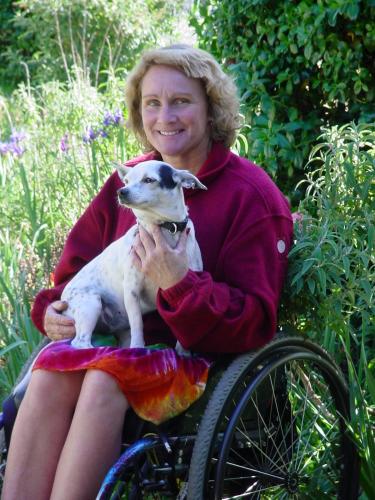 Pam Courtney is the recipient of the 2004 Freida J. Riley Teacher Award sponsored by the Christopher Columbus Fellowship Foundation and the National Museum of Education. The Award honors an American teacher who works with a physical disability, teaches in an especially challenging educational environment, or has performed a heroic act by making an exceptional, personal or physical sacrifice on behalf of students.

Ms. Courtney, a former Junior Olympic athlete, earned her teaching credential in 1984. That same year, while in training for the 1988 Olympics bicycling team, she was severely injured in an automobile accident, losing the use of her legs. After a difficult and challenging recovery, she persevered and became a Physical Education (PE) teacher, in spite of being confined to a wheelchair.

Ms. Pam, as she is known to her students, is a full-time PE teacher at Hubert H. Bancroft Elementary School in Sacramento , California . She teaches students from grades 1-6, including those in the Special Education program.

To teach, reach and meet the needs of students with diverse abilities, Pam does not limit her classes to the usual PE program. She has developed a curriculum that makes it easy and fun for the children to learn anatomy, physiology, dance routines, nutrition, good sportsmanship, positive character development, and leadership skills. She is the director of Bancroft's annual musical production which requires over eight weeks of after-school practice for upwards of 130 students as they develop a spectacular show of songs, dances, skits, and many other talents. She looks for the area in which each individual child can excel.

Pam imparts her joy of life, enthusiasm and optimism to the students, their families, and her colleagues at every opportunity. To illustrate the admiration that the students and community have for Pam, one only has to look back to the 1996 Olympics held in Atlanta . Using the athletes as an example, Pam talked with her students about the importance of working toward a goal in life and putting forth your best effort. Little did she know that more than 500 letters from students, staff, parents and community members had been written to nominate her to be an Olympic Torch Bearer. Because of the community support, she was chosen as one of two "community heroes" for this honor.

Pam was a Junior Olympic gold medallist at age ten, and her dream was to be an Olympic athlete. Being a Torch Bearer brought her close to realizing that dream. On the day she ran the torch, she stopped often to pump her fist high in the air. She tearfully told a reporter, "I'm so proud to be an American right now. I can't believe it!" That pride was shared throughout the community. Her route was lined with nearly 200 students and their families carrying banners and shouting her name. As she passed the torch to the next runner, she passed the Olympic spirit to the children.

Pam has received many awards, including the Sacramento City Unified School District 's Unsung Hero Award, the California State University , Sacramento (CSUS) Alumni Honors Award in Health and Physical Education, the Christian Beret of Northern California 's Most Inspirational Handicapped Persons Award, YWCA Outstanding Woman in Sports Award, and the CSUS Award for Significant Achievement in teaching. She served on the Governor's Council for Physical Fitness and Sports, and is past president of the Sacramento Chapter of the California Association of Health, Physical Education, Recreation and Dance.

Being an avid sports fan, she works with local semi-pro and professional teams, and invites them to present motivational and anti-drug speeches to her students. Each summer, Pam travels the country in her van (converted and customized by her dad). One summer, students from Bancroft were playing in a Little League championship tournament in Cooperstown , New York . Much to their surprise, Miss Pam showed up to cheer for them. She also regularly attends recreational soccer, baseball and basketball games to give support to her kids.

Pam Courtney serves her students and the community in many ways. Her dedication to teaching is evident to anyone who has had the pleasure to know her. A parent shared the following story:

"The most illustrative moment to me of Pam's teaching occurred when I was up on a ladder in the back of the gym at 6:30 p.m. , decorating a bulletin board. Ms. Courtney and a sixth grade student came in. The student wanted very much to perform in the talent show, but was having difficulty learning the dance steps and couldn't maintain the beat, and was worried some students were going to make fun of her. I turned around when the music started and watched as Ms. Courtney rolled along across the gym floor in her wheelchair. She slowly and patiently counted out the steps for the student and worked with her for about half an hour until the student learned the steps. Pam finally left the school. The student could dance to the beat. Pam, a die-hard sports fan, was late to the Sacramento Kings basketball game that had started at 7:00 p.m. And I, the parent, had tears running down my face. A teachable moment was captured and a child was taught to dance by a dedicated woman in a wheelchair."