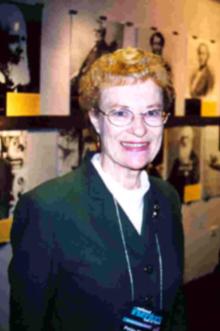 Patsy Sherman is a retired 3M research chemist and co-inventor of Scotchgard products. She was part of a 3M research team in the 1950s working on a project for the military. The new fuel used in jet planes was causing rubber parts in the fuselage to disintegrate. The research chemists were trying to produce a rubber compound that would withstand exposure to the fuel. A lab technician spilled a sample of one of the experimental chemicals on her tennis shoe. The sticky substance would not wash off with water or chemical solvents. But, more importantly, it resisted soil and stains and stayed cleaner than the rest of the shoe. She and her fellow 3M chemist, Sam Smith, recognized almost immediately the potential for the accidental product. Scotchgard was born.

Patsy Sherman joined 3M's chemical division in 1952 after receiving her B.S. in chemistry and mathematics from Gustavus Adolphus College in Minnesota. She was the only female chemistry major in college, and the first woman elected to the 3M Hall of Fame for scientific personnel, the Carlton Society, in 1974. She and co-inventor Sam Smith hold joint US patents for a dozen or more products. She has several other US patents as well.

Patsy's own daughters have also followed in their mother's footsteps. The oldest has a master's degree in chemistry and the youngest has a degree in biology.

In 1982, Patsy became the manager of Technical Development, retiring in 1992.