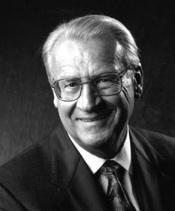 Some people leave a mark on the world through work, others through family, and still some through altruistic volunteerism. When one man has made significant contributions in every aspect of his life, it is time to recognize those efforts.

Richard Nichols was in executive management at The Goodyear Tire & Rubber Company where he worked with gentle dignity. He is an extremely organized, compassionate man. His work in America was valuable to The Goodyear Tire & Rubber Company, and their confidence in him was so great that he represented this company in France, outside of Paris for numerous years. This kind of dedication speaks well of a man who believed in standing for his company and his country.

Dick also believed that youth should be recognized and archived in their Hall of Fame. Therefore, he strongly supported efforts to create the National Gallery for America's Young Inventors. His encouragement was the impetus for the efforts to request the rights to establish the National Gallery to preserve student inventors, grades K-12. So, with Dick Nichols at the helm of the Inventors Hall of Fame, the City of Akron and the nation celebrated invention at all ages: K-12 student inventors, collegiate inventors, adult inventors, and corporate inventors.

Dick Nichols is a visionary and a man of incredible honor. He performed each job throughout his life with the utmost dedication. Therefore, those who worked for and with him felt incredible respect and admiration for him. Whatever he did, it was done well-with amazing organizational skills and with hope and expectations that his dreams would be fulfilled. His inspiration transferred to others who believed they could carry out whatever Dick expected of them, because he supported his colleagues-as friends.

Dick Nichols is a man who has given much to the business and educational community. His extensive outreach continues to be seen in the ongoing recognition of inventors nationwide.