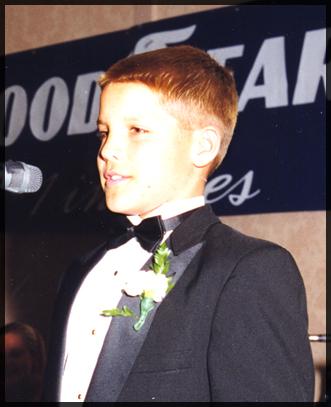 Richie Stachowski is now a full-fledged entrepreneur who heads a Moraga, CA, company, called Short Stack, in reference to his love of pancakes. In the fall, Richie took two days off from school to fly to New York where he proceeded to sell Toys 'R' Us on the potential of his invention. Richie emerged from his 2 1/2 hour presentation with a deal that made him one of the nation's youngest toy makers. Toys 'R' Us agreed to buy nearly 50,000 of Richie's Water Talkies, which have a suggested retail price of $11.99. Richie and his Operations Manager, Bob Miller, nearly tripled production at an overseas plant to meet the increased demand. Since his initial presentation, at least 19 retailers stock Water Talkies -- a list that includes Target, WalMart, Sportmart and Longs Drugs.

Underwater acoustics captured Richie's interest during a trip to Hawaii last summer. Frustrated by his inability to talk to his father while they snorkeled in the ocean, Richie decided to develop a solution. Richie's Water Talkies are fashioned from a small plastic membrane to keep water out of the device.

Since the original news story appeared in the local newspaper, Richie and his mother have received more than 1,000 phone calls. A large number have come from reporters and producers swooping in to tell his story -- including one from a Chinese newspaper. The TV appearances have included local news programs, syndicated shows, such as Inside Edition, CNN, and Nickelodeon's Figure It Out. Richie also appeared on NBC's Tonight Show.

Richie has gotten the royal treatment as media descend to tell his story, capitalists clamor for a piece of the action, and everyone from aspiring inventors to Jay Leno vies for a few minutes of his time. Through all the remarkable twists and turns -- the sudden celebrity, the magnificent money, the tantalizing business proposals, the production deadlines -- Richie has remained a happy-go-lucky fifth-grader, oblivious to the commotion and curiosity that surround his prodigy.

As for the small fortune accompanying his newfound fame, the details are a little sketchy to him. His mother and money manager, Barbara, has a habit of sharing financial information just when he is settling down to watch TV. Getting a financial update isn't a big priority then. "She tells me a lot of stuff, but I don't always listen," Richie said. "I guess I have a focus problem."

He spends his free time perfecting his new invention for next year.