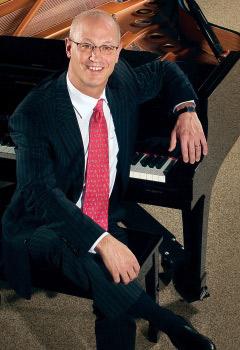 Registered by: University of Miami Frost School of Music Students

The students at the Frost School of Music would like to publicly recognize Dean Shelly Berg's commitment and contribution to the field music and education.  His passion and enthusiasm are infectious and his dedication to musical excellence has continuously been an inspiration to us all.

Shelton G. Berg is Dean of Patricia L. Frost Professor of Music at the University of Miami Frost School of Music where he leads a dynamic faculty and teaches outstanding students. He was previously the McCoy/Sample Professor of Jazz Studies at USC Thornton School of Music and a past president of the International Association for Jazz Education (IAJE). In 2000, the Los Angeles Times named him one of three "Educators for the Millennium." He is widely acclaimed for his energetic and innovative approaches to performance, composition, and pedagogy. He has performed and recorded with top music industry professionals and has orchestrated music for television, motion pictures and major orchestras. Berg has performed and lectured throughout the world and has numerous arrangements, compositions and texts in publication. The All Music Guide says "Shelly Berg is one of the finest pianists around in the early 21st century playing modern mainstream jazz." His CD, Blackbird (Concord) reached #1 in US jazz radio (Jazzweek, 2005). Recent recording and arranging projects include a solo CD The Nearness of You (Arbors), Arturo Sandoval's Latin Grammy winning A Time for Love (Concord) and several NPR radio broadcasts for Jim Cullum's Riverwalk Jazz series.