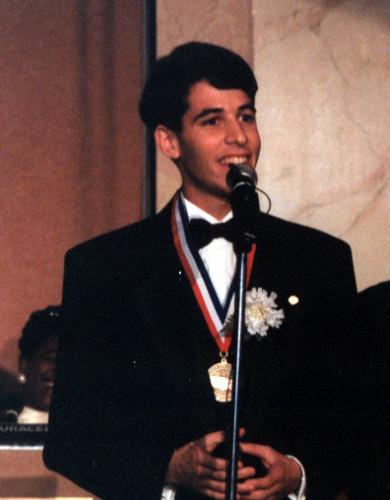 Dan Weitz spent most of his early years trying to take things apart to see how they worked. But since the age of 11, Dan has been trying to put certain things together...atoms, to be precise. Dan’s 6th grade teacher took his class on a visit to the Princeton Plasma Physics Laboratory to learn about nuclear fusion -- the power source that fuels the stars. Nuclear fusion produces electricity without any radiation, pollution, waste, or danger to people. Fusion uses magnetic fields to heat gases to more than 300,000,0000 C so that they achieve a "plasma" state. This plasma is so hot that it must be contained in a "magnetic bottle" -- a magnetic field that holds the plasma in mid-air.

The problem has been to keep the plasma from breaking out of the "magnetic bottle". Dan invented software and hardware that constantly monitors the strength and gravity of the "bottle", calculates the best magnetic field for holding the plasma, and constantly adjusts the shape of the "bottle" accordingly. His program even learns from its own mistakes!