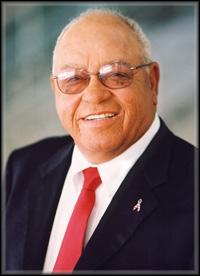 Started coaching in the 50's and for many of the following decades.

Registered by: National Gallery for America's Young Inventors on Dec 1, 2005

Herman Boone is a great teacher, coach and motivator. The clearest example of his character is when he became the head coach of T. C. Williams High School "Titans" in 1971. The city of Alexandria had just integrated its school system. Boone got the position over a senior white coach with much following. Many challenges would follow his decision to take the position.

Despite incredible tension, Herman pulled together a diverse group of players into a remarkable team of football players - the best in the State of Virginia and second in the nation. In doing this, Herman, together with Coach Bill Yoast, unified a city divided by prejudice.

In the Walt Disney Pictures Feature Film, "Remember the Titans", Boone is depicted by Denzel Washington in telling the story of the 1971 football team.

In December of that year, president Nixon said that the team, “saved the city of Alexandria.”