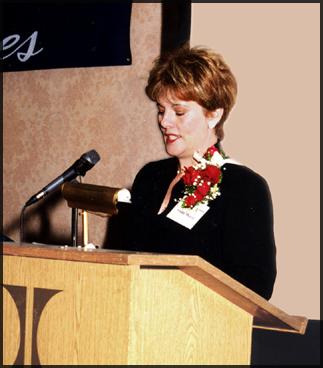 On March 25, 1995, Denny and Vicky Moore lost their son, Ryan, in a tragic accident. Ryan, along with two other teens, died when a Conrail train slammed into their car at a crossing that had no warning lights, stop signs or gates. In March, 1998, the Ohio Supreme Court awarded punitive damages when it found the rail company partly responsible for Ryan's death. The Moores used the entire amount of money won in the lawsuit to create the Angels On Track Foundation, which seeks to save lives by funding railroad warning gates and lights at dangerous intersections. The Moores' lawyer, Eric Kennedy of Cleveland, Ohio, said that, to his knowledge, this benevolent act was unprecedented. "It's the first time I'm aware of it ever happening in this country. To have families who have suffered such tragic losses actually give back millions of dollars is truly extraordinary." (Plain Dealer, Feb 28, 1998)

Due to the safety theme reflected by several of the inventions inducted this year, it seemed appropriate to invite Denny and Vicky Moore to share their story and their vision for Angels On Track. These are "truly extraordinary people". And, through their efforts, Ryan's death will bring life to many others.